In addition to National Championships, the WBIF also hosts and organises (with the assistance of participating Nations) the following World international events:

National Championships, the WBIF also hosts and organises (with the assistance of participating Nations) the following World international events: 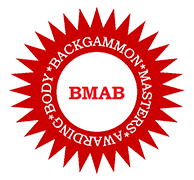 The Backgammon Masters Awarding Body (BMAB) confers mastership titles and proficiency level certificates based on calculated error rate performance (using eXtremeGammon) in live clocked matches in tournament conditions. It is the central hub of the Backgammon Masters Series Group whose fundamental goal is to promote backgammon as a leading international mind-sport.

This centralised awarding and moderating body within the Group receives videos and transcribed matches from the various affiliated tournament organising bodies, then analyses, checks and moderates where necessary. The results will be published for all participating players. Results tables will be provided, including average PR, average win-rate, and Elo rating. Using agreed criteria, mastership titles will be awarded and proficiency levels will be certified where appropriate. These lifetime awards will be reported both by inclusion in the published results and within the content of periodic newsletters. The newsletters will also contain reports from completed tournaments and details of forthcoming tournaments (also covered in an events calendar). The body will have a committee structure representing both the interests of the participating bodies and the participating players. In addition to the primary role of reporting BMS tournament results, the body will be able to accept individual applications for awards, where applicants are able to demonstrate that matches forming the submission are either pre-designated or continuous and played in accordance with the specific requirements/rules of the body. 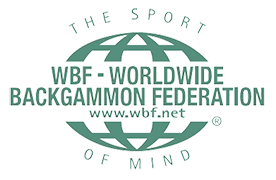 The Worldwide Backgammon Federation (WBF) was founded in 1986 by a passionate Italian player, codifier of modern Backgammon, eng. Alberto da Pra of Milan. The General Secretary is Marco Fornasir, director of many international tournaments.

The primary tasks of the Federation are: to spread the game, standardize the rules and supervise and coordinate the tournaments with maximum transparency and correctness.

The aim is to impose Backgammon as a true sport of the mind. In this perspective WBF has organized, in partnership with Studiogiochi, the Backgammon Olympics in 1992 and 1996 in Venice. Currently, after 33 years of activity, WBF supervises and organizes some of the most important tournaments in the world and the WBF registered trademark enjoys consolidated and widespread prestige.The first international tournaments organized by WBF were held at the Hotel Royal in Sanremo (Italy) from 1988 to 1991. The activity expanded with the tournaments in Cannes and St. Tropez (1991), while from 1991 until 2009 the Mitteleuropa tournaments were organized annually in Nova Gorica (Slovenia), which contributed greatly to the success of WBF.

Since then WBF has organized tournaments from the Caribbean to Asia passing through many European countries; the most important tournaments are included in the WBF Golden Circuit. 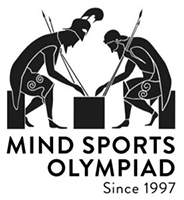 The WBGF and MSO have formed a new alliance for hosting backgammon events at the Mind Sports Olympiad this August, 2020.

Several tournaments will be played at BGStudio Heroes including:

The Mind Sports Olympiad is an international event with over 60 different board game competitions ranging from classics like Chess, Scrabble and Go to newer games, including Settlers of Catan, 7 Wonders, Dominion, Magic the Gathering and Carcassonne. Card games figure too, with an amateur poker world championship and bridge, along with a general knowledge quiz, stratego, shogi, and dominoes. The Mind Sports Olympiad also founded two competitions that were designed to find the best games all-rounders in the world and possibly the top games player alive. These are the Pentamind and the Decamentathlon both inspired by the athletic pentathlon and decathlon. There are also opportunities to learn games and play uncompetitively for free.

The inaugural event was held in 1997 in London with £100,000 prize fund and was described as possibly the biggest games festival ever held. It was the first event of its kind aiming to create an Olympics of the mind, awarding gold, silver and bronze medals for each event. The Mind Sports Olympiad continues to take place every year in England.